South Asia is an exciting region with countries coming from distinct cultural and political geographies. This gives its female and genderfluid artists fertile creative soil as they address diverse themes like conflict, colonialism, war, and gender.

In this article, we put together five individuals doing some fantastic and inspiring work for South Asian art. From mosaics to video, graffiti to sculpture, these artist work across a variety of materials and themes. 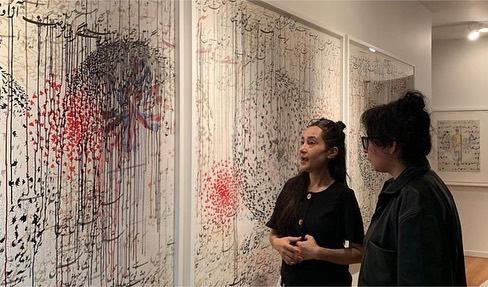 Shahzia Sikander, a trailblazing Pakistani-American artist, is one of the most important artists working today and the recipient of MacArthur’s “genius” grant. Sikander is lauded for creating the modern neo-miniature style and redefining pre-modern and classical Central and South Asian miniature painting traditions.

Her groundbreaking thesis, The Scroll (1989–1990), pioneered the neo-miniature movement and attracted accolades, exhibitions, and attention.

The artist-activist shines in her daring selection of subject matter that speaks of the violence against women in Bangladesh and challenges the historical portrayal of women’s bodies and societal roles.

From shoes to underwear, Lipi integrates a variety of women’s clothing accessories into her razor blade sculptures, which is compelling testimony.

Shamsia Hassani, named one of Foreign Policy’s 100 global thinkers in 2014, is Afghanistan’s first female graffiti and street artist. She uses her art to depict Afghan women in a culture where men predominate. Hassani has traveled to do on-site murals and participate in residencies and gallery exhibitions in numerous North American, European, and Asian countries.

Hassani has created stark images of suffering and loss as a direct response to attacks by the Taliban and other terrorist groups.

The extreme fear, despair, and violent repression Afghan women experienced during the Taliban takeover were expressed in two powerful images of girls in radiant blue carrying symbols of hope as ominous, gun-toting fighters loomed over them.

A gender-expansive, genderfluid Valmiki artist based out of Birmingham/London, UK, Seema builds vessels and portals- giving viewers access to the realms she constructs within SEEMAWORLD, a theme park of her practices.

SEEMAWORLD focuses on non-specific, other, and queer cultures. She explores topics like the caste system, queer sorcery, fan labor, and gender taxonomy through the fusion of 2D and 3D mixed media.

A recipient of New Midland Group’s Research and Development Bursary (2021-2022), she has exhibited her work in collaboration with multiple institutions, including Eastside Arts Alliance, ICA in London; CCA in Glasgow, UK; Fotomuseum in Zurich, Switzerland; LUX in London; and New Art City.

0
Pratika Yashaswi September 16, 2022
SUBSCRIBE
Get related topics
in you email.