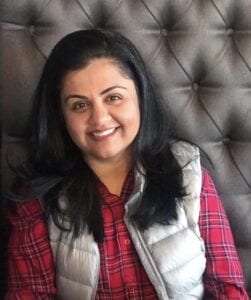 Author Anisha Bhatia’s novel, “The Rules of Arrangement,” is a witty tale of finding one’s path. It is a delightful, yet incisive social commentary of modernity juxtaposed with tradition, of people at war with their very own conditioning.

Here is my conversation with Anisha about her creative journey and the behind the scenes of her soon to be released “The Rules of Arrangement.”

Thank you for talking to us, Anisha. Obviously, the first question that comes to my mind is, How did the idea of becoming a writer come to you?

I started writing because I didn’t want to forget my grandparents. I grew up listening to stories about their lives in Sindh and the home they left behind during the Partition. After my second child, I took up an evening class at the University of California, San Diego simply to get out of the house. The class was called “Creating Unforgettable Characters,” and Sheila Bua was the result!

What does writing mean to you? For instance, is it cathartic, invigorating or even exhausting?

Oh gosh, writing is all that! Exhausting, when the piece does not come together, when the characters won’t do what you want them to. Invigorating, like breathing in the freshest, purest air, when connections are formed in the story, when characters work together, or when I meet other writers who are just as neurotic as me! And its always cathartic because writing helps you become more compassionate and to make sense of things around you.

What is your thought process like when you conceptualize a book and go through its nuances and sketch out characters and situations?

My thought process is all over the place. But it always starts with a theme, or what I’m trying to say. For example: how do you fight your own mind? That, to me, is the central theme of “The Rules of Arrangement.” 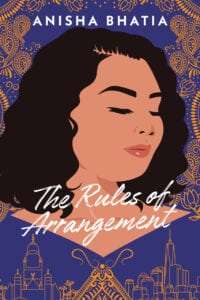 Tell us a little about “The Rules of Arrangement”

“The Rules of Arrangement” is the story of Zoya Sahni, who simply put, wants a different life. But she doesn’t know it. On the surface, she wants what she is made to want: a good, Indian married life. But as things unfurl and stories come to light, she realizes that fighting one’s mind is the hardest thing to do, and that everyone has a story, even annoying matchmaking aunties. Sheila Bua is Zoya’s paternal aunt and a force in herself. It is through the unveiling of her story that Zoya comes to understand the price is paid when dreams are abandoned. The book comes with a motley crew of members: bosses, cousins, friends, you name it.

Is “The Rules of Arrangement” your social commentary on what you’ve personally seen or experienced in India or even after moving to America?

I would say so, yes. For example, even with all the educational and technological advancements in India, not marrying is not a viable option. The thought that a person, a woman, wants to remain unmarried or child-free, voluntarily, is something Indian society still finds difficult to accept.

How long did it take you to finish the book?

I had actually started writing it in 2014, but very lazily. I wrote only because I had to read my work every two weeks in a Read and Critique class. So, I chugged along. I only started considering it as a book and writing seriously from 2016 onward, then on the weekends in 2017 when I started working full time. After a lot of editing and re-editing, I found my agent in 2019, and a publisher in 2020 and here we are!

Do you draw inspiration from real life and people to etch out your characters?

I usually do. But it’s never one person. It’s like a buffet – take one attribute from a person, another’s physical quirk, maybe a particular way they sit or stand or twitch their nose, then add a backstory that I might have heard, and make it fit together to create a completely new person.

Was there anything interesting or even unsettling that you discovered, either about yourself or anything else during your research?

Writing Sheila Bua’s character has made me more compassionate towards older women. As a young woman growing up in India, there was – and I believe still is – no dearth of aunties to give you advice. I had never thought about them as being people, ones who had a life apart from their auntie-selves. The book made me see them in a new light.

What do you do when you’re not writing? What’s your mantra for balancing work and family responsibilities?

When I’m not writing, you’ll find me either in a bookshop or on a beach or rummaging through my pantry looking for snacks – for my kids, not myself! OK, I may have occasionally snuck a bunch of unhealthy stuff for myself, too!

Balancing work and family responsibilities is an ever-evolving process. Some days it works seamlessly, while on other days you are grateful to escape with your sanity intact. Discipline and patience help. A helpful spouse is also key, so ladies, choose well!

What is usually the hardest part of your creative process?

The first draft for sure, when you have no idea where you’re going. You can’t see the path ahead at all. There’s a reason it’s called the first draft from hell!

While writing your book, which part did you find hardest to write and what the most fun?

I loved writing the irreverent thoughts inside Zoya’s head. Growing up in India, you were not allowed to say things out loud which could mark you as a firebrand (read: not good daughter-in-law material), but I think a lot of girls have thoughts like these running through their heads.

And Sheila Bua, of course! I LOVED writing the funny things she says!

Lalit Khurana was the hardest to write. I realize that I need to be sympathetic toward a character I’m writing, no matter how “bad” they are. If I don’t like them, I can’t write them. For the longest time, Lalit escaped me, and one of my astute writer friends told me it was because I didn’t like him. I was horrified. It was like being told you don’t like one of your kids – ha!

Is there any message that you aspire to give through your book, or hope the readers will take home with them?

I’d like to tell them that fighting your mind, your conditioning, is one of the hardest things a person can do. And that the people around them, their elders, the aunties and uncles, all of them have a story. They are who they’ve become because of that story.And foremost, I wrote this story for girls, for women, especially South Asian, who’ve been made to feel “less” than because of their appearance or weight or skin. I want to tell them that you are enough, you deserve all the good things, all the chances you get – take those chances, don’t hold yourself back, and watch yourself soar!

This article appears in the June issue of SEEMA Magazine, check the rest of it out here!