Back to contents
Pioneers
0

Devyani Krishna was among the first Indian female ‘abstract’ artists, who absorbed and expressed global as well as local influences. Her paintings glowed with the fusion of temporal, scientific, mythological as well as spiritual colors.

Krishna was born in Indore, Madhya Pradesh, in 1910. She felt the breezes of the city, which had become the local hub of global, modernist experiments, influenced by architects Eckart Muthesius and Le Corbusier, and sculptor Constantin Brâncuși. Her first art teacher, though, was D. D. Deolalikar. She was the first female artist to get a diploma from the Indore School of Art. In 1936, she joined Bombay’s prestigious Sir J J School of Art, specializing in mural painting and graduating in 1940.

Krishna married the painter Kanwal Krishna in 1942 and journeyed to the Himalayas from 1949 to 1952, researching and documenting local culture. She was a painter, print-maker and teacher, also researching in toys, folk art and batik. In 1954, she began to teach in Modern School, New Delhi, where she retired as head of the Art Department in 1977.

Devyani Krishna specialized in mural art, but also trained in oil painting and water colors. She chose graphite, conte and charcoal to draw and explore transparency of form. She was at ease in the larger formats, examining concepts of space and exploration and the rare genre of abstract. Later, she also explored printmaking.

Krishna’s paintings show the unmistakable influence of the early 20th century world and era. Her travels through the Himalayas – Khyber Pass, Kashmir, Sikkim and Tibet – deeply influenced her work. She once reflected, in 1974: “I got deeply interested in the spiritual and mystic qualities in the art forms of those regions.”

That was around when the Chinese entered Tibet, and the Buddhists there lost their freedom. Krishna’s paintings clearly encapsulate sound, clear design, color and harmony, within broad and compositional features, even when she dabbled with public themes. They beamed out an essential and spiritual message, which is evident in works titled “Bam Bam Bhole” and “What and Where.” They reflect not merely a worldly or socio-political representation, but predominantly an inner world of spiritual symbols.

When asked why a painting titled “Veiled Mask” seemed sad, she explained: “No, it is not sad. This is a veiled mask. It is very hard to get to know people. This is just a human being behind two masks.” It was her portrayal of the Himalayan tragedy unfolding before her.

Krishna’s collections show a number of calligraphic letters, tridents or similar signs with an earthly signature, yet with an essential life force, retaining some pure elements of primitivity. The patterns and designs, with many sacred symbols and concepts, were based on themes of family, war and religion. Her creative works expressed the temporal and spiritual world, combined with science, in a universal language. They were blends, not purely abstract nor realism.

In 1964, the Inter-Asian Art Exhibition gave Devyani Krishna a government scholarship to travel in 1968 on a cultural exchange program to Romania, Hungary, Czechoslovakia, Norway, Sweden and Denmark (1968). She was honored with the Sahitya Parishad Samman (1988-1989). At the turn of the millennium (1999-2001) she got an emeritus fellowship for her contributions to Indian art.

While Krishna’s paintings seemed introspective and reflective, she did not employ socially relevant comments or figurative idioms. Her journey through printmaking was an interesting blend of an inner feminine muse and effort to blend ancient symbols from various religions, as well as her exploration of her core self and scientific leanings.

Krishna’s work was conceptual as well as ethereal, dabbling in universal themes of religion, family and war. Her best-known prints depict Allah in calligraphic Arabic characters. Her paintings were fluid, without clear form. The image looked as if it were flowing, merging with the environment.

According to Richard Bartholomew, a critic, “It is difficult to describe the power of her drawings… It is as though a great choreographer compressed the total movement of the dance, such as the dance of Shiva, into a single ideograph.”

Krishna’s journey was a continuous striving to experiment and explore, and she had striking impact on the art world till she passed away in 2000 at the age of 85.

Devyani Krishna’s work is currently on display at DAG, New York. All images courtesy of DAG

To learn more about artists spotlighted by DAG, check out Shobha Broota Finds Beauty in the Spare and Simple

0
Preetam Kaushik July 12, 2022
SUBSCRIBE
Get related topics
in you email. 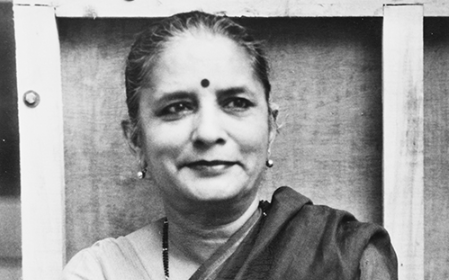