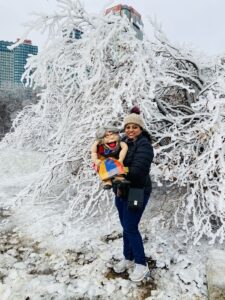 She started dabbling in these art forms at a very young age. Enveloped by an artistic family- her mother is a Carnatic music singer and father a theater artist – playing musical instruments came to her effortlessly. Inspired by a family friend who was a magician, she started performing small magic tricks, and was attending magic conventions at the age of 7.

At one of these conventions, she got a ventriloquist puppet, a yellow feathered monkey, that she named ‘Tommy.’ She was eager to learn but she ended up practicing alone before the mirror for hours because ventriloquists believed the field was not for women.

Later she found a virtual guru, Edgar Bergen, an American ventriloquist, actor and radio artist. According to Raveendran, “Like Ekalavya [the tribal rejected by Dronacharya, the teacher of the Pandavas in the epic Mahabharata, and who learned from the guru by watching the training], I learned from my guru distantly, by listening to his audio CDs. It was a very big challenge to make it sound the way it has to be.”

Bergen was renowned for speaking without moving his lips, unlike some other ventriloquists. Raveendra persevered until, like her guru, she became skilled in projecting and modulating her voice with sealed lips.

She was still in school when she started performing magic shows along with ventriloquism with ‘Tommy’ on Doordarshan, India’s national television channel. For three years, she performed on TV, without charging a fee.

“It gave me good experience in handling people, to face the audience, to be spontaneous, to handle unplanned situations,” Raveendran says.

Once she lost her voice before a show in Mysore. When she got on stage, she was dizzy because of the medications she was taking, but she soldiered on, and even received good reviews.

A self-proclaimed perfectionist, Raveendran works not only on the physicality of her act, but also ensures the script is engaging. She instills humor, satire, light references to the audience and social issues in her act.

Raveendran’s puppets also exhibit vivid colors and characters. Whether it’s a sparky grandma with her wisecracks, or a dhoti-clad grandpa handing out marriage tips, each has its own unique persona. Young Dinku, her frequent puppet companion, is a celebrity of sorts himself.

She has travelled to 19 countries, and was the first lady ventriloquist to represent India at the Vent Haven convention in Kentucky. That was in 2010. In 2018, Raveendran won the President of India award. She now has five Limca Book of Records mentions to her name.

Her father’s ingenuity and support helped her leap over these obstacles. He designed and engineered many of her puppets, including one 10-foot behemoth, Mahisasur, that got Raveendran into the Limca Book of Record for performing with the tallest puppet. Throwing her voice 10 feet up was hard, but she did it.

Raveendran’s father also suggested performing with three or four puppets simultaneously. While performing with one or two puppets at a time requires a fair amount of proficiency, managing a four-puppet act is a complex task, demanding skillful coordination, mastery and presence of mind.

“I have to use five different voices, and both my hands and legs to manipulate the various levers – limbs, head, mouth for each puppet,” Raveendran says. “I have to remember the script, match the right dialogue to the right puppet. While I’m doing these things for one puppet, I have to keep other puppets alive.”

Raveendran has also performed with everyday items, such as a book, coffee mug, white board, microphone, and even with a dog.

“One day, I would like to perform with a buffalo,” she says.

While Raveendran has made her mark in ventriloquism, she keeps her other interests alive. She intersperses her magic tricks with ventriloquism, and is currently learning Hindustani music.

“I want to sing the most complicated classical songs with ventriloquism, using two or three puppets,” she says. On her wish list is a challenging act with six puppets.

“The design is ready,” she says. “I just have to practice.”