California Senator Kamala Devi Harris’ historical nomination as the Democratic vice presidential candidate has meant different things to different people. To women of color, it has meant validation, representation and hope; to youngsters, it’s monumental and inspiring; and for activists, it is a tool to galvanize the community to vote for change. This August, Harris became the first African American and first Indian American woman to be chosen as a presidential running mate. 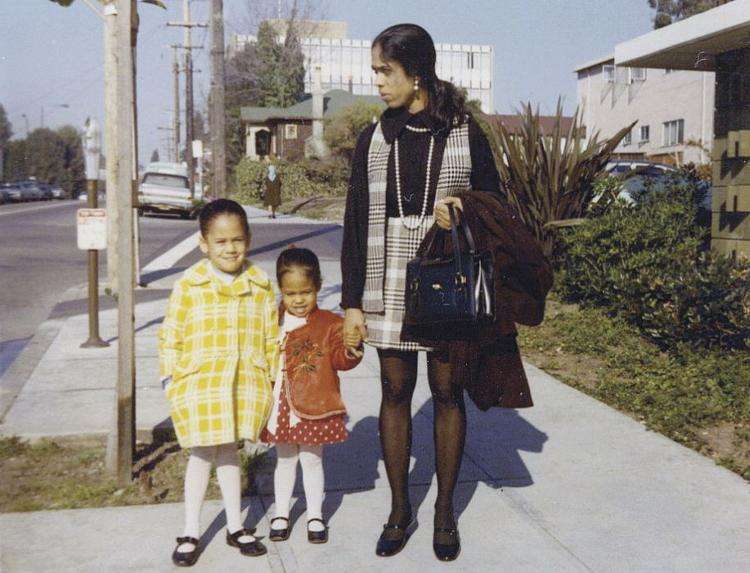 Her mother, Shyamala Gopalan Harris, came from Tamil Nadu in India; her father, Donald Harris, is a Black man from Jamaica. Besides her mother, the people who have played huge roles in her life are her sister, Maya; her niece, Meena; her husband, Doug Emhoff; and her stepchildren, Ella and Cole Emhoff.

Whether it’s on the Senate floor, campaign trails, Zoom calls with her supporters or donors, or the debate stage, Harris has displayed her passion to work with and for the people, showing empathy, resilience, strength, knowledge, calmness, and clarity. It was evident on the debate stage with Vice President Mike Pence, where she faced Pence’s expected sexism and racism, all the while being careful to avoid those labels reserved for women, especially women of color: emotional, angry, nasty. On that stage, Harris conveyed so with her facial expressions than her words. Her side-eye; her stares; her repeated head shakes and head tilts. And the classic line: “Mr. Vice President, I’m speaking.”

In a video posted on her social media handles at the time, she said: “To you my supporters, my dear supporters, it is with deep regret – but also with deep gratitude – that I am suspending our campaign today. But I want to be clear with you: I am still very much in this fight. And I will keep fighting every day for what this campaign has been about. Justice for the people. All the people.”

Harris has spent her life fighting injustice. It is a passion that was first inspired by her mother, an immigrant, activist, and breast cancer researcher.

Breaking the proverbial glass ceiling is nothing new to Harris. In 2017, Harris was sworn in as a United States senator for California, the second African-American woman and first South Asian-American senator in history. She served on the Homeland Security and Governmental Affairs Committee, the Select Committee on Intelligence, the Committee on the Judiciary, and the Committee on the Budget. 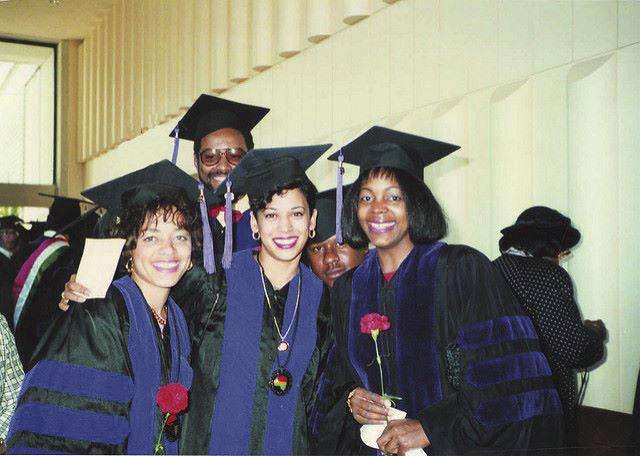 Even her Secret Service code name, Pioneer, is significant. As per an Aug. 17 CNN report, the code name “is a nod to Harris taking her place in history as the first Black woman and Indian American woman on a major party ticket.”

“I think the selection of Kamala Harris as a vice presidential candidate has been a really incredible opportunity for us to engage the public in terms of telling her story,” said Neil Makhija, executive director of the Indian American Impact Fund, an Indian American advocacy organization.

“Kamala’s story is the American story,” Makhija said. “Her acceptance of the vice presidential nomination is a quantum leap forward for Indian Americans, showing that we are taking our place in American history books.” 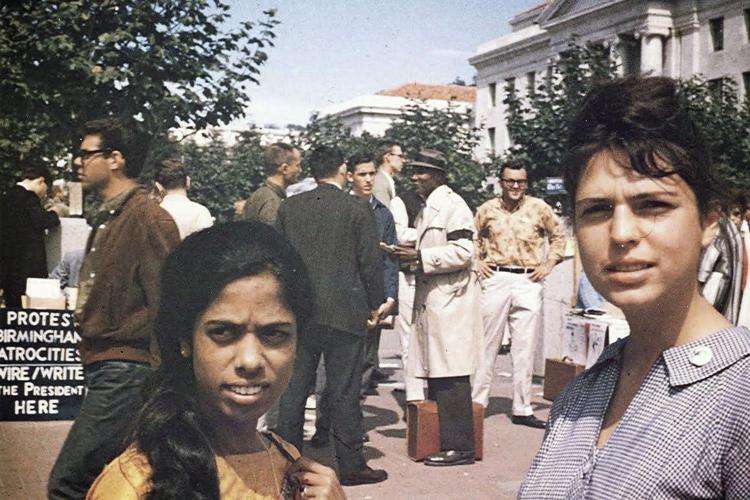 Since August, several South Asian Americans, especially women, have been taking to social media since Harris’ nomination, hoping that it opens doors to other South Asian women to see themselves in leadership positions at the highest levels of government.

“Kamala being so close to becoming the vice president makes me, as a South Asian woman, feel mainstream in America 20 years after I came here,” said Aditi Pal Karandikar, a member of They See Blue, a grassroots organization in California that aims to get Americans of South Asian origin to help Democrats win elections across the board.

“I feel our community is seen [now]. She is a powerful role model for women and girls of color, especially immigrants, to see their potential in America,” Pal said.

It was this message that Harris delivered on Aug. 31, at a webinar, “South Asian Women in Leadership: Ushering a New Wave of Diversity in the Biden-Harris Era,” organized by South Asians for Biden.

“To all the young women who are watching this, I want you to know that leadership begins the day you are born. You are never too young or too old to be a leader,” Harris said there.

A Darling of the Community

The South Asian American community has been excited about Harris since August and has come out in large numbers to support her. This was evident a few weeks ago when Georgia Sen. David Perdue made fun of her name, deliberately mispronouncing it.

“The most insidious thing that Chuck Schumer and Joe Biden and are trying to perpetrate and Bernie (Sanders) and Elizabeth (Warren) and Kamala…or what KAH-mah-lah? Kah-MAH-lah? Kamala-mala-mala?! I don’t know, whatever,” Purdue said to the crowd in Macon, Georgia, on Oct. 15. Social media instantly started criticizing Perdue and standing by Harris. A new social media campaign called #MyNameIs was launched as well.

In the preface of her memoir, “The Truths We Hold: An American Journey,” Harris dedicates a paragraph on the meaning and the right pronunciation of her name:

“First, my name is pronounced ‘comma-la,’ like the punctuation mark. It means ‘lotus flower,’ which is a symbol of significance in Indian culture. A lotus grows underwater, its flower rising above the surface white its roots planted firmly in the river bottom.

In another instance, she writes: “Our classic Indian names harked back to our heritage, and we were raised with a strong awareness of and appreciation for Indian culture.”

Inheritance From Her Mother

Throughout her campaign trail, first as a presidential candidate and then as Biden’s running mate, Harris has always spoken about the influence that her mother, Shyamala Gopalan Harris, had on her thought process and in shaping her career and her ideals.

During the vice-presidential debate, while highlighting all the barriers she was breaking as Joe Biden’s running mate, she said that her mother “must be looking down on this.”

Earlier at the Democratic National Convention, when she accepted the vice presidential nomination, Harris spoke about how her mother came to the U.S. from India for higher studies, and how she met her husband, Donald Harris, an immigrant from Jamaica, Harris said her parents fell in love “in that most American way — while marching together for justice in the civil rights movement of the 1960s.”

Wishing that her mom was with her during the historic moment, Harris said: “I keep thinking about that 25-year-old Indian woman, all of five feet tall, who gave birth to me. On that day, she probably could have never imagined that I would be standing before you now and speaking these words: I accept your nomination for vice president of the United States of America.”

In her memoir, Harris details what she inherited from her mother, and from her upbringing.

“Though I miss her every day, I carry her with me wherever I go. I think of the battles she fought, the values she taught me, … There is no title or honor on earth I’ll treasure more than to say I am Shyamala Gopalan Harris’s daughter,” she wrote.

A Chitti to Many, ‘Momala’ to Two

Harris’ DNC speech was pathbreaking in many ways. Along with laying out the agenda of a Biden-Harris administration, she acknowledged her biracial roots and her family ties. She not only touched on the importance of family but went into detail on how she defines her own.

The use of the word “chiiti” displayed her pride in her South Asian roots. Padma Lakshmi, Mindy Kaling and many others took to social media to post how they could relate to Harris’ use of the Tamil word for aunt.

Since then, many in the South Asian community have started referring to Harris as “Kamala aunty.”

While formally nominating Harris alongside the senator’s niece Meena and sister Maya at the DNC, Ella was all praise for her Momala.

“To my brother and me, you’ll always be ‘Momala,’ the world’s greatest stepmom,” she said. “You’re a rock. Not just for our dad, but for three generations of our big, blended family.”

As Jewish parenting site Kveller.com points out, “Momala” isn’t just a play on Harris’ first name. Emhoff and his kids are Jewish, and “mamaleh” is a Yiddish word that means “little mama” (but is often used as a term of endearment for kids).