It was a newspaper clipping many years ago that sent me driving down narrow dusty roads off the Bangalore-Mysore highway to look for a village called Kodiyala. This was a weaver community that made saris during the time of Tipu Sultan and continued to make them for the Mysore royal family. Even prime minister Indira Gandhi wore these saris. I have been to Kodiyala a couple of times, always making it a point to buy saris from the weavers. Then I was pleasantly surprised to see a new revival project, Hosa Arambha.

Meaning new beginnings in Kannada, the Shrenis Trust and the weavers began working on this project in November 2019.

This was part of architect Kshitija Mruthyunjaya’s final year M.A. research project, at which time she contacted the Bengaluru-based The Registry of Sarees.

“They introduced me to the Kodiyala weavers via the Shrenis Trust, a community organization in Bengaluru,” says Mruthyunjaya. “That is how the work in Kodiyala began. [My] key interests lie in process- and research-driven interventions, whether it is architecture or textiles.”

Kodiyala, once a thriving handloom-weaving center in Mandya district of Karnataka has seen huge changes over time. These Telugu-speaking weavers, called Padmashalis originally migrated from Andhra Pradesh. Before the project began, out of around 400 families in Kodiyala, only four were still producing handloom goods;  the rest were working on powerlooms.

Sridhar Padmashali, 48, a weaver who has worked on handlooms for 32 years, says he moved to Bengaluru for a few years to work on powerlooms.

“I found that it was not suitable for me,” he says “My health took a beating. When Shrenis Trust approached me in 2019, I knew it was time to get back to the handloom.” 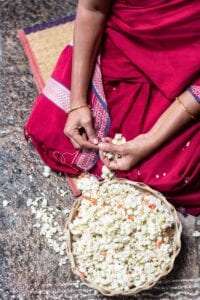 To ensure that dignity of the weaver, the Kodiyala sari needed a distinct identity, based on history, mindful methods, and responsible production systems based on the weavers’ skills. The ideas were introduced in phases.

“The key goal is to create a viable, sustainable long-term environmental and economic entity that contributes to the growth of the individual and community,” says Mruthyunjaya.

A handwoven code was developed to provide information about who made the sari. A pinned leaflet on also explained the process of development. In future, these are to be digitized with details to help the wearer and artisan connect directly with each other.

Currently, Kodiyala textiles are mostly brightly colored saris, with motifs borrowed from other clusters. There are no clear ways to identify what was originally woven in Kodiyala, raising a few questions.

“Were they imitating other clusters? Did they have a strong identity in design and technique, and it vanished,” asks Mruthyunjaya, explaining that the artisans were actually employing a variety of skills to keep up with changing markets.

Re-introduction of cotton from Salem, Tamil Nadu, was the main part of the intervention.  Since the weavers were restarting cotton handloom after a long time, they first used mill spun yarn, dyed with Azo free dyes since Azo dyes are potentially carcinogenic. After several meetings with the weavers to understand their skills, a phased intervention plan was developed.

These included plans for the use of relevant motifs designed to reconnect the Kodiyala weaving community to their ancestral roots to establish an identity rooted to their contextual history.

Seven motifs were developed for use on the border and the loose ends of the sari.

The colors and texture also relate to the mythological story where lotus fiber is described as ‘white and shimmering’ and the conch shell white used to describe the color of the cotton, says Mruthyunjaya. These white tones were picked, along with the indigo, a lighter shade of yellow, and a red closely associated with the weaving community’s history. 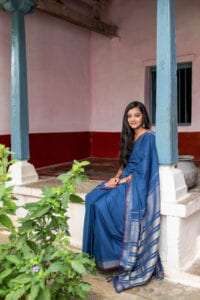 Many weavers in Kodiyala have aspired to move back to handloom if it was viable. For those who lost their jobs at the powerlooms, this project gave them the opportunity to not just move back to weaving handloom but also be gainfully employed.

According to Sridhar, “We have a steady market for our weaves and are able to see demand through the year. Also, if you have a space of 8 feet by 8 feet, a loom can easily be part of a home. There is no dependency on electricity. The investment is minimal and, instead of one powerloom, we can have 10 handlooms.”

It helps that Sridhar has been able to get more villagers on the handloom bandwagon.

“Lakshamann Raav, a master weaver and our production head, with experience of over 25 years in the handloom industry, will be training the weavers in the upcoming phases,” says Mruthyunjaya. “This will also mean that other members from the weaver families and the non-weaving community will be trained in several pre loom processes, which is key for successfully weaving handspun yarn.

As he puts it, “The end goal for this project is to create an integrated facility, a seed-to-sari intervention that will hopefully bring back many of the facilities associated with handloom weaving.”