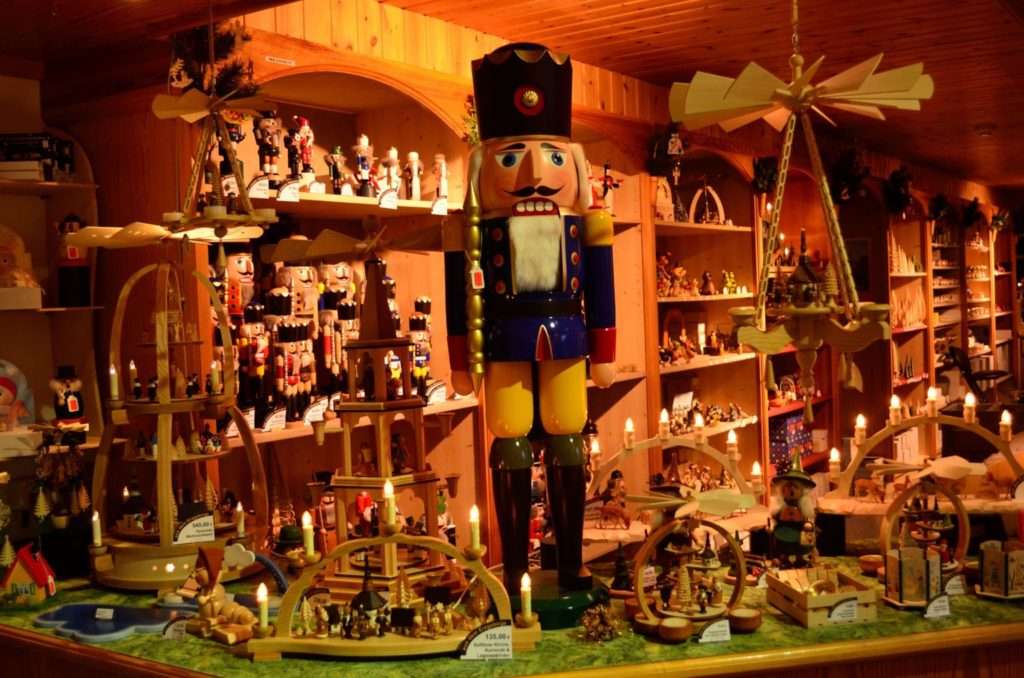 It was still drizzling as we drove from the town of Dresden towards the Ore Mountains to a charming village called Seiffen tucked away in the German state of Saxony. Seiffen wooden toys were known for their Christmas traditions and a fairy tale toy story was awaiting us. Despite being heavily padded under layers of clothing, the biting December cold was just about getting to me. And then all of a sudden, the sun made an appearance. To me, it was like what the Germans call, “Schwibbogen.”

We stopped by at a small hamlet on the way for a cup of coffee. A cluster of houses stood out in the verdure landscape. Carpets of snow lay scattered around. The bare branches of the trees were kissed with snowflakes. But I was drawn towards the quaint homes, particularly the charming windows. Standing there were brightly dressed gaunt wooden men with big mustaches gazing at us. And then there were pretty wooden arches that were decorative candle holders.

“That is the Schwibbogen,” explained our guide, Seema Prakash. In the medieval era, the miners would return home in the cold dreary night from the mountains. And it was the sight of a brightly lit Schwibbogen on these windows that cheered them up,” she added. Personally, that was how I felt as the sun cheered me up too on that wet cold day.

As we headed uphill the sun vanished just as it had appeared. But I was not complaining. It was the Christmas season and the atmosphere looked straight out of a winter wonderland. Seiffen was once the home of miners and it had been bringing cheer to the world every Christmas for over 300 years. Seema told us that these miners became toymakers and every toy they created was synonymous with Christmas and was inspired by their own lives.

“The Schwibbogen, for instance, had images that showed miners gathering together,” she said. “They probably used to light lamps at the entrance of their mine as an arch during Christmas Eve service.” She added that Seiffen wooden toys had become legendary over time.

The entire village was cloaked in a white blanket. Small houses painted in hues of yellow and orange peeped out through the trees, drenched in snowflakes. For a moment I felt lost in a fairy tale. Seiffen’s origins date back over 700 years and the village was always associated with the miners. It was then called Cynsifen, referring to the sieves used for washing the iron ore but later on it came to be known as Seifenware, after the Seiffen wooden toys.

The miners started making toys as a hobby, mainly for their children, but it soon turned into a profession when the tin and silver deposits declined in the mountains. There was plenty of wood in the area and the miners learned the craft of turning wood into utensils, which eventually led to creating toys. As the mines were formally closed, one tradition ended, and another began.

At the entrance of the town one of the men in mustache towered over us. Tall, gaunt and overbearing, he was the nutcracker, one of the signature toys created by the miners. Designed as a grim soldier, the miners were actually mocking the men of authority by caricaturing them. We pottered around the village, which was wrapped in a coat of mist, and walked towards the Erzgebirge Toy Museum. Then we were lost in a world of Christmas traditions.

There was music flowing through the rooms as pretty doll houses beckoned us. The entire museum was filled with pyramids, chandeliers, carousels, candle sticks and stands, horses and wagons – all taking me to a bygone era. I was transported into a cold dreary world of the miners, one which was harsh and tough and, yet, their creative minds, their sense of humor, their dreams and hopes and their living traditions were translated into a kaleidoscopic world of toys.

In a little corner stood an array of miniatures which showcased pretty vignettes from the lives of these people. Their lifestyle and traditions were all carved inside a little match box. I could see their little world in a box – a living room, a family sitting for dinner, the miners walking home in the dark with their lights, a cold dreary night with brightly lit Schwiboggen. It was almost like they had left little details of their life behind in their toys.

I was eventually introduced to the central Christmas figure, the miner himself designed as a journeyman – a carrier of light called the Knappenfiguren. He was often accompanied by the angel of light. But my favorite was the smoking man, Rauchermann, who smoked his pipe casually. I could see the many faces of the smoking man – from a traditional gentleman, and a rounded snowman, to a stylish lad on a bike oozing attitude. There was also a female version – a hip grandmother comfortably indulging in her pastime. In another corner was the replica of the miner’s own parlor, and even a small farmhouse tucked away in a snow capped landscape.

The craftsmen in the museum invited us to try our hand in crafting and assembling toys. I created a snowman straight out of a wonderland. He looked absolutely stylish with a scarf and a pipe, the Christmas version of the smoking man himself. I was given pens and paints to design him the way I wanted. I dressed him in white with a red hat and then lit him up so that he could be warm and smoke in peace.

As I left the museum, the bells from the 18th century church beckoned us. Lit up with lanterns and candles, it was probably another vignette from the life of miners, for who light and warmth were important symbols, given that their world underground was always dark and dreary. I walked around aimlessly as the village lit up and the town came alive with its musical toys.

I warmed myself with a glass of Glühwein, given the Christmas tradition of drinking mulled wine, and watched the stars slowly emerge out of a cloudy sky. And I lost myself to a world of nutcrackers and smoking men gazing at me from the street. Finally, I bid goodbye to Seiffen, while the angel of light blessed us – and the miner, the journeyman, walked away with a lantern.