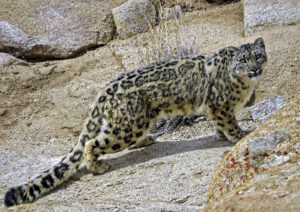 We scanned the rugged and scarred mountain terrain in Ladakh for the Snow Leopard which is an elusive and rare treat to spot. Fingers of snow and ice caressed the wrinkled land in rugged Ladakh.

“Where’s the snow leopard?” we asked Tchewang Norbu, our host and guide on tracking the snow leopard in Ladakh adventure. It was winter, the best time to spot the big cat but all we could see was the vast monochromatic landscape of the arid high-altitude desert that is Ladakh in the northwest corner of India.

“Here,” he said and pointed to a couple of telescopes. We wedged one eye on the phallic scopes that sat snugly atop sturdy tripods positioned on a sky-high ridge.

She sat on top of the ridge, looking disdainfully down at us. That was our first sighting of the elusive Grey Ghost, as the snow leopard is called in Ladakh, her spectacular mountain home. She was so well camouflaged, her abundant fur patterned with rosettes and spots unique to each feline, that we would not have located her without the help of local spotters. They scout the vast mountainous terrain for tourists eager to see the snow leopard.

“She has come to feed on the remains of a blue sheep she killed last evening,” Norbu whispered. On cue, the mountain cat started to descend, weaving her supple grey body, tail swishing, between rocks and boulders. She stopped as she reached her kill; snarled at us as if to say: “Mine, and I am not sharing,” and proceeded to drag her meal behind a rock.

The snow leopard in Ladakh live show over, we strolled back to our off-road, high-clearance vehicle. Below us, the Indus river flowed gently by, crystals of ice floating on its emerald-green waters. Gusts of wind chilled us to the bone. We had forgotten that the temperature at an altitude of 12,500 ft in these Himalayan mountains could dip to -4 degrees Fahrenheit. We momentarily longed to return to the luxurious centrally heated confines of the Grand Dragon Ladakh hotel in Leh (capital of the Union Territory of Ladakh), which we had left early that morning.

Instead, after our excursion, we headed for Ullay, a sleepy village of six households that would be our base for the next three days. The sun had set by the time we reached Ullay, bathed in the golden glow of a full moon. We stood spellbound outside the six-room Snow Leopard Lodge, admiring the magic of an enchanted night. A British fellow guest turned to us and sighed: “When we first came here, we were, in a sensem blind. They taught us how to see!”

Much as we would have liked to stretch the moment, freezing temperatures forced us indoors. Over a simple yet wholesome meal, Norbu who owns Snow Leopard Lodge, shared the story of his life and his hate-turned-to-love relationship with the snow leopard. Yes, there was a time when locals viewed the cat as the slayer of livestock that had to be hunted and felled.

Back in the day, families would spend the bleak winter months huddled together, doing virtually nothing.  All that changed when the Snow Leopard Conservancy India Trust, a Leh-based, non-profit, non-government agency, started to educate the local population about the benefits that would accrue from protecting and showcasing the Grey Ghost to tourists and wildlife enthusiasts from around the world. Subsequently, the villagers have successfully been made stakeholders in the effort to save the endangered snow leopard and the agency has set up eco-tourism projects like home stays, given villagers the means to corral their livestock safely, and initiated a livestock insurance scheme which is run by the community itself.

Now, with the advent of winter snow leopard tourism, sleepy mountain villages have started to buzz with local enterprise. In turn, the population of the snow leopard, no longer reviled and hunted, has bounced back in recent times. According to the Snow Leopard Conservancy India Trust, the Snow leopard’s range stretches across 12 countries in Central Asia, including China and Mongolia. The population of the cat is estimated to be between 5,000 and 7,220 of which around 200 to 600 prowl the Himalayan heights in India.

Early next morning we set off on a snow leopard trek, which had us bonding with the land the Grey Ghost shares with humans: we said hello to a domesticated shaggy yak that carted water from a melting glacier; stopped by a local brewery where Chhang, the local beer, was being brewed in a wooden barrel; waved to cheery, rosy-cheeked kids framed in the windows of their mud-brick homes, draped with prayer flags…

Soon we were driving through a desolate yet eye-engorging landscape, past frozen waterfalls draped like curtains on vertical cliffs; icicles hanging like daggers on overhanging boulders… We stopped to admire a herd of blue sheep while an ibex with rapier-like horns stood vigil on the crest of a craggy ridge. The sight of a golden eagle circling overhead startled a flock of blackbirds, which scrambled in panicked flight, and seemed to spray the blue skies with black confetti.

We pulled up at a snow-dusted clearing where the staff of our lodge in a support vehicle had set up tables, chairs, crockery and cutlery for a surprise open-air lunch. Later, we set out on a short snow leopard trek and walked through a muffled snow-bound valley where the gurgling of a mountain stream and the crunch of icy crystals under our snow boots were the only sounds.

Soon, it was time to head back to our lodge, where we huddled around a crackling fireplace and later snuggled under a mountain of quilts in our heated bedroom. While we slept, nature was at work, painting the windows of our room with a collage of icy crystals. 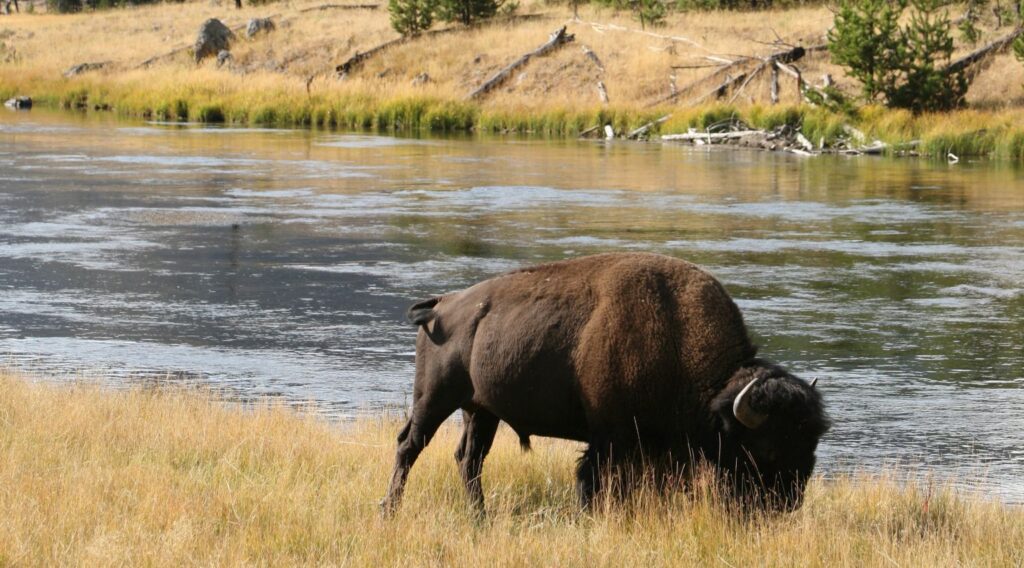 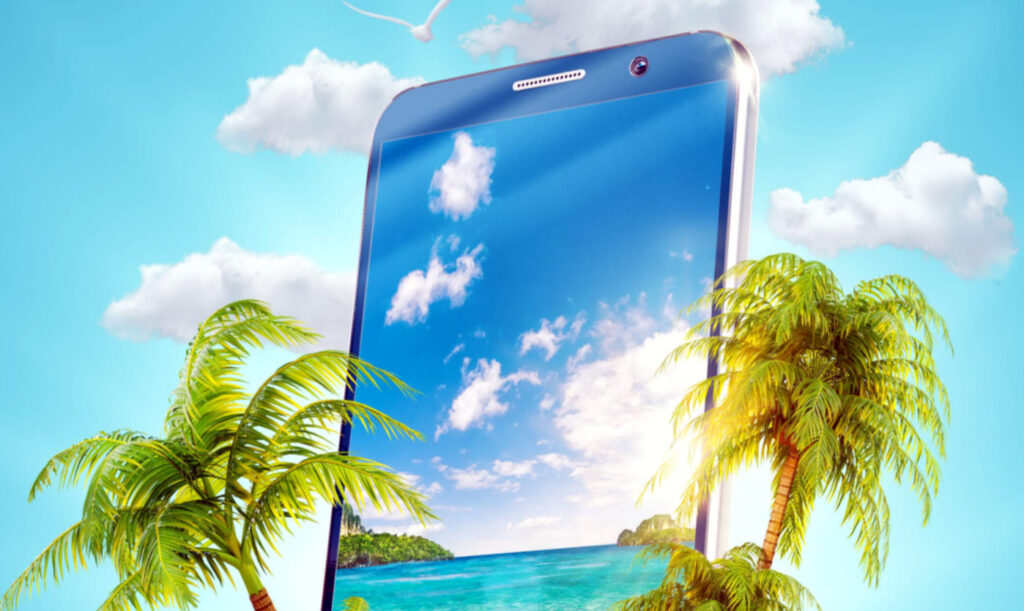 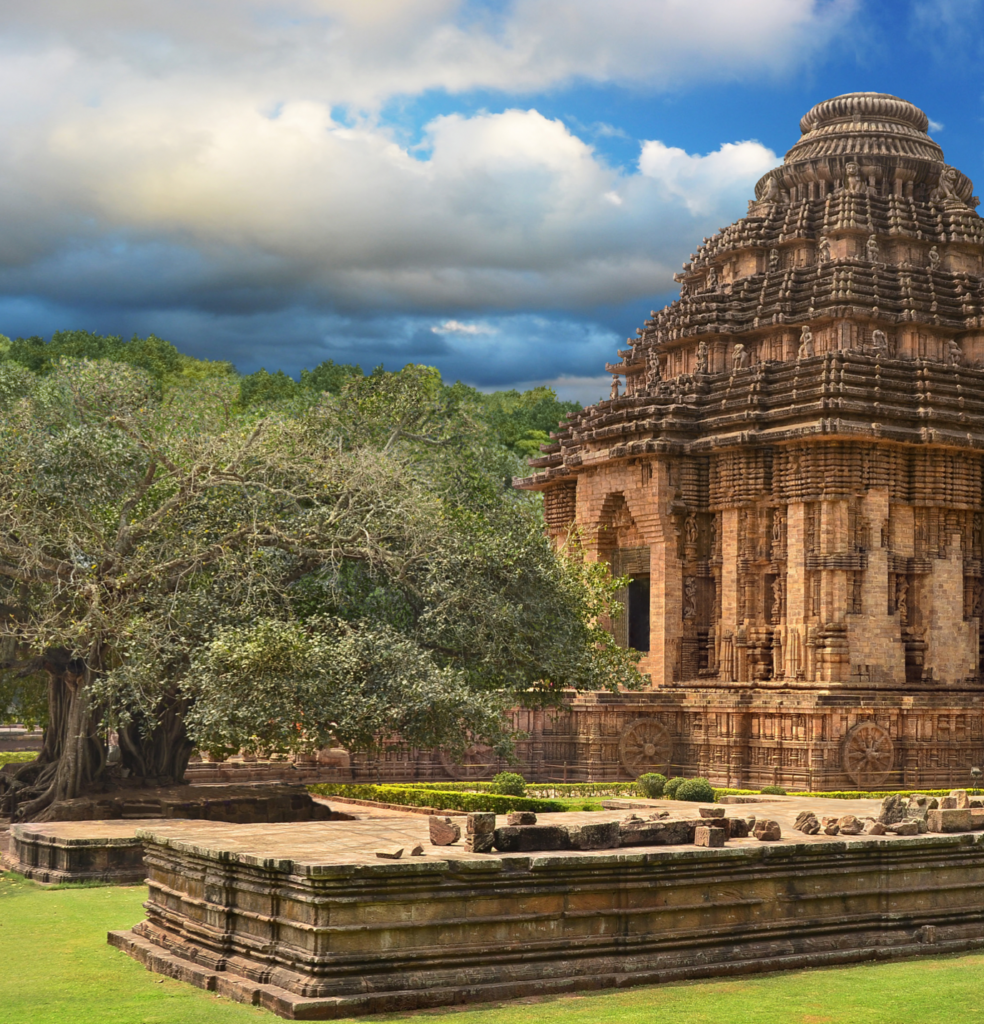 PremiumVIPContent
Odisha, The State of Amazement
1 year ago / by Swarnendu Biswas