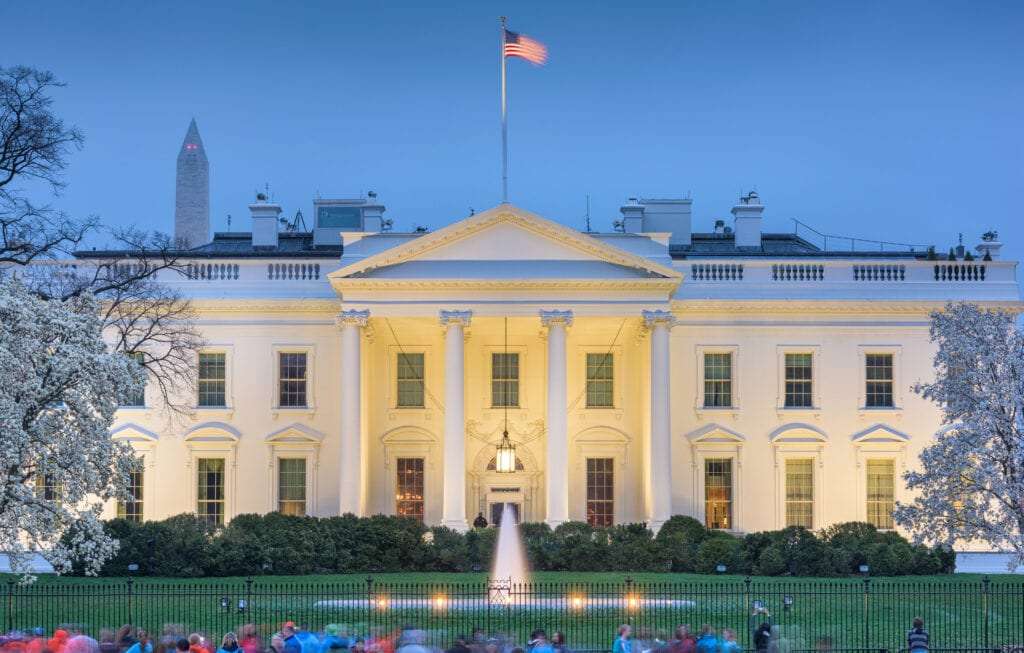 According to the 2020 Indian American Attitudes Survey (IAAS), 72 percent of registered Indian American voters plan to vote for Biden and 22 percent for Trump. The survey was conducted by researchers from the Carnegie Endowment for International Peace, Johns Hopkins University, University of Pennsylvania in partnership with the data analytics firm YouGov.

However, the GOP has been able to make headway among Indian American voters at least. According to a 2016 pre-election survey by AAPI, about 19 percent of Indian Americans viewed Trump favorably; now about 28 percent are inclined to vote for him.

Asian Americans make up the fastest-growing racial or ethnic group of eligible voters – 4.7 percent of all eligible voters in the U.S., according to the Pew Research Center. Both major parties have led an aggressive campaign to woo the community in the run-up to the elections.

Seema Magazine spoke with some of the pioneering women advocates and activists canvassing for Democrats this election season.

Dewan’s journey to political activism started just after she moved to the U.S. from India as a teenager. People made fun of her accent and she felt that she needed to do something to make people take her seriously.

“So I ran for student government and was elected,” she said.

Dewan, an attorney at Wilson Elser Moskowitz Edelman & Dicker LLP, a national law firm, had worked with South Asians for Obama as state director for their New York chapter in 2012 and as the national co-chair for South Asians for Hillary in 2016.

She said that her group’s approach is to educate, engage and mobilize the community. The communications team is bifurcated into social media and traditional media outreach, and the rapid response team works specifically to dispel myths being circulated in the community about the candidates.

“We put out … content to correct the misinformation and to provide some context for people who blindly support Trump just because he is friends with Indian Prime Minister Narendra Modi,” she said.

The organization has hosted events on COVID-19’s impact on South Asians  and their small businesses, the rise in hate crimes, the difficulty in getting an education in the Trump era; and so on.

“Now we are focusing on the mobilization phase, which comprises of phone banking to South Asian voters,” Dewan said.

Rakhe has about 15 years of experience in student affairs and engagement. She works at the Youth Leadership Council of ‘They See Blue.’ The organization launched in 2018 aims to mobilize South Asians to help elect Democrats to office. 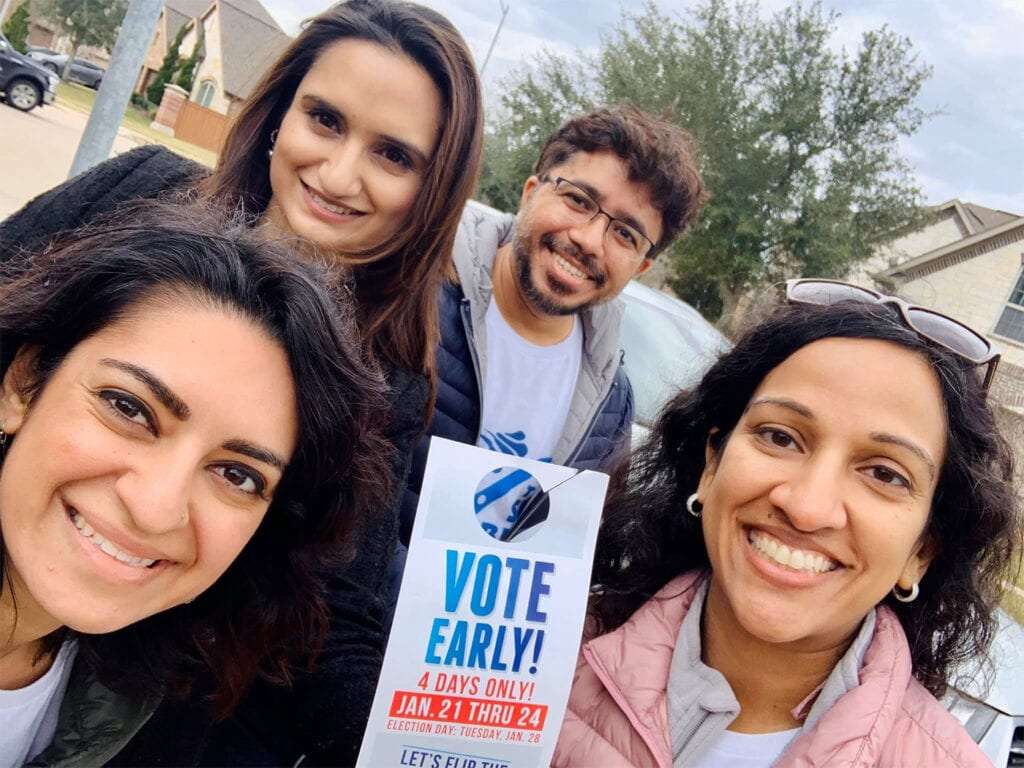 Rakhe’s father moved to the U.S. about 60 years ago, and her mother about 40 years ago, both from Maharashtra.

“When I started working with college administration … I really began to see –  at least through my students – the importance of political organization,” she said.

They See Blue reaches out to young voters through social media platforms, such as Twitter and Instagram. They have reached out to around about a hundred South Asian students’ organizations in swing states. The work involves making announcements or passing along information and videos centered around the elections. \

“We are focusing more on states such as Florida, Georgia, Arizona, Texas, Michigan,” Raqkhe said.

An important part of their campaign is to reach out to voters via texts, calls,  as well as snail mail, all to remind them to register to vote. 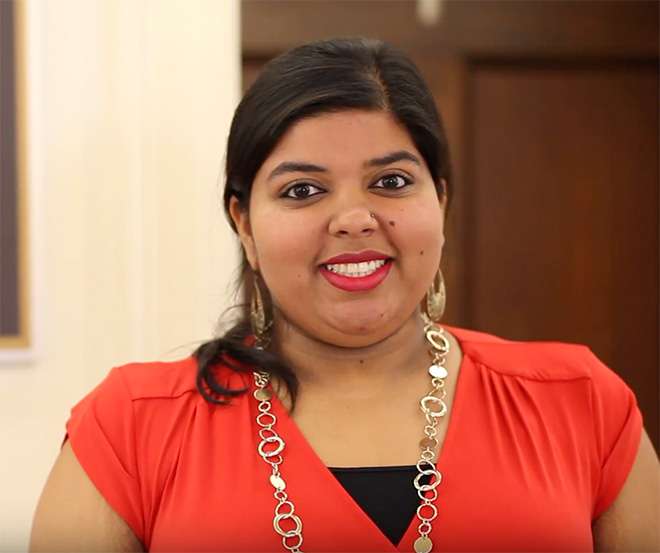 Nisha Ramachandran co-founded the organization with three friends in 2016 to uplift the people, policies and ideas that will move the South Asian community forward.

Ramachandran, whose family traces its root from Kerala in India, went to school in D.C. and has  worked with a Congressman Ami Bera. In 2018, Desis for Progress launched its political engagement committee and began supporting South Asian candidates across the country.

“We worked broadly with other Asian American organizations that are working to elect Democrats,” Ramachandran said.

Currently, the team is canvassing for the 2020 presidential election as well as for other candidates running for office at every level, sending out weekly emails they and other groups are doing, sharing resources such as a South Asian election guide and information on how to register to vote and vote.

“We are putting information such as images and videos — things that you can share with your family members that are ready to post on WhatsApp,” she said. 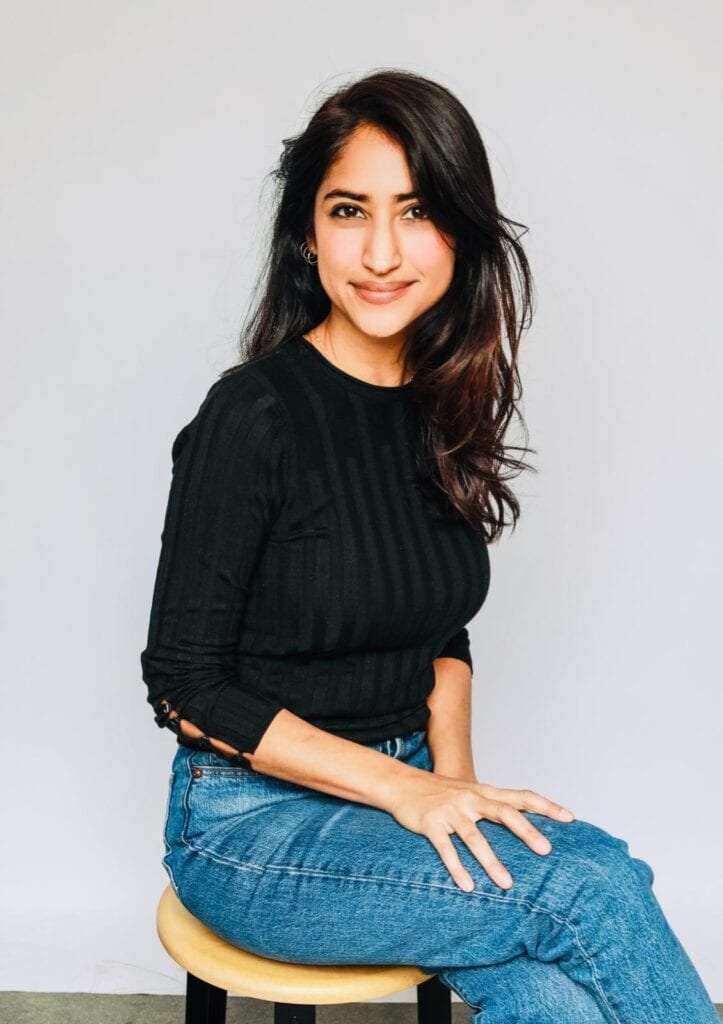 The group helps mobilize South Asian women across the United States to get involved and get out to vote for Democratic nominees. The group recently concluded a virtual phone bank event with Meena Harris, the founder of the Phenomenal Woman Action Network Senator Harris’ niece. During the event, over a hundred South Asian women called Nevada voters to  persuade them to vote.

Satiani, whose parents are from India and Pakistan, is a spokeswoman for the organization. She said the organization will hold four or five phone-banking events over the next two weeks.

“The goal of the group is really just to help people create voting plans, help people understand where their nearest phone-bank or polling place is, help them understand voter registration deadlines and why Biden-Harris is the right choice for America,” Satiani said. They have held social media activations, where South Asian women created one-minute-videos on why this election is so important to them and why they have decided to vote for Biden-Harris.

“We have testimonials from across the country,” Satiani said.

Satiani said the organization is focusing on how the Biden-Harris administration will be good for U.S.-India relations and immigration.

“As immigrants and a nation of immigrants, we want to support a family-based immigration system,” she said. “The immigration system we have right now is broken. We want to focus on how we can reform the H1B system and eliminate these country quotas for green cards and the Biden-Harris administration is really going to do that.”