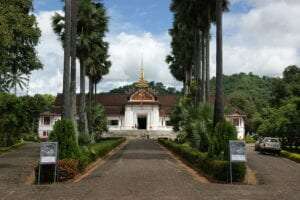 The sunrise was still half an hour away as I tried to control my labored breathing and wipe off the beads of sweat forming on my forehead. I was climbing the 300-plus steep stone steps that led to the peak of Mount Phu Si, Luang Prabang’s highest hill right in the middle of the UNESCO World Heritage town. The skies were still dark but the town was wide awake. Or at least Sisavangvong Road was.

The main street in Luang Prabang had just witnessed hundreds of saffron-robed monks walking in a line as picture-hungry tourists bought sun-dried rice cakes to give to them as alms (Tat Bat), breaking the peaceful quiet. It is one of the town’s daily ‘attractions,’ a wonderful tradition that has been hijacked and commercialized in recent times. I did not want to be part of it. Instead, after watching the incongruous process from afar, I walked farther ahead, towards the Royal Palace Museum to reach the foothill of the 330–foot-high hill opposite it.

Many huffs and puffs later, the golden spire of the pagoda atop, Wat Chomsi, came into view and I followed it like it was a beacon. Dawn was just breaking as I made my way to the platform beside the temple that already had a few people patiently waiting. The sky was slowly changing color — from pitch black to purple, to different hues of orange until the sun, a fireball, popped up from behind a hill, bringing morning light that stretched beyond our vision. The view below was breathtaking — forested hills and lush greenery beyond the network of streets neatly forming intersecting grids, the rush of the Mekong and Nam Khan rivers on either side of the town formed by the peninsula and dominated by the myth of the naga (serpent), the light catching the golden spires of numerous wats (temples), and the raised roofs of traditional and colonial houses merged in a harmonious nature. The panoramic serene sunrise view is the best way to start a day in Laos’s ancient royal capital.

Luang Prabang has a long history, starting with the legend associated with its creation — Buddha’s prophecy that the area would be a powerful kingdom when he rested there on his travels. For two centuries – the 14th to the 16th – the town was the capital of the powerful Lane Xang kingdom, deriving their wealth and prosperity as a strategic location on the Silk Route. It was also a center of Buddhism. When the French Protectorate was established in 1893, the country was divided into three and Luang Prabang once again regained its royal reign under King Sivavang Vong until Vientiane became the administrative capital in 1946. Today, the UNESCO site, comprising 33 villages, is so well preserved that walking around gives off a feeling that one is in a living museum. It is not a bustling city like Vientiane but has a laid-back cultivated charm that spellbinds even the most skeptic traveler.

The wats in Luang Prabang are some of the most sophisticated Buddhist temples in Southeast Asia. Boasting over 30 temples scattered in the town, their façades are rich with sculptured and engraved Jataka depictions, aesthetic paintings and gilded touches. The most-visited temple complex lies at the northern tip of the peninsula, the Wat Xieng Thong (monastery of the golden city). Built in the 16th century, the complex was spared from plunder during the Chinese Black Flag army invasion in the late 19th century. With its sweeping double-tiered roof and rich lacquered interiors of the sim (main hall), it is one of the finest examples of classic Laotian design corresponding to Buddhist doctrine. The complex, a site for former Laotian coronations, also has many buildings and chapels built and restored over the years with royal patronage, including the funeral carriage of Sisavang Vong. Just walk down Sakkaline Road from Wat Xieng Thong and one will be left amazed by a chain of gilded temples on either side, each with their own uniqueness, just beckoning to be explored. If you come across a resident monk in these wats, strike up a conversation to learn more about their lives.

The colonial influence is strong in this historic town. A walk or bicycle ride about town reflects the fusion of traditional raised Lao wooden houses side-by-side 19th and 20th century brick and stucco European buildings with pitched tile roofs, many of which have been turned into hotels, homestays, handicraft shops, and cozy cafés. French bakeries with fresh breads and cakes are popular jaunts, as is Saffron, a popular coffee shop started by an American expat selling delicious Laotian beans, with seating by the Mekong. The bars in the town come alive in the evening, catering to a tourist audience, as do the many foot massage parlors calling out to you.

What makes Luang Prabang truly captivating is the food on offer. Start by visiting the morning market, set up daily in a by-lane by the Mekong. The rich aromas from steaming vessels containing broth, sticky rice, and fresh rolls will make your knees weak, sold alongside fresh foraged herbs, organic vegetables and game; a sensory overload. Throughout the day stop at small eateries and gorge on khai pen (fried Mekong riverweed) with jaew bong, a buffalo fat red chili dipping sauce; fresh khao soy, the national noodle dish; sai oua or sausages packed with spices; mok pa (steamed fish in banana leaf) with sticky rice; or lam, stew thickened with eggplants, and papaya salad, said to have been introduced to Thailand by Laotians. The night market selling Laotian handicrafts along Sisavanvong street also has a food alley, hidden right at the very end. I lapped up hot pork laab served right from the wok and grilled meats barbecued over charcoal, washing them down with Beer Lao, the national beer as the name suggests. If roadside eateries are not your cup of tea, restaurants like Tamarind offer a curated introduction to Lao cuisine while L’Elephant serves French dishes made with local ingredients.

Since the town is surrounded by natural resources, some of the best tourist and local attractions are in the outskirts. Spend the day reveling in the natural beauty of Kuang Si waterfalls — a three-tiered, 50-meter drop fall, gushing and tumbling amid dense jungles, creating serene limestone azure pools. Dip your toes or swim in the allowed pool, but learn about the legend too — the falls forming after a wise man revealed the waters of Nam Si by digging deep into the earth. Next door is a beautiful butterfly garden, created in 2014 by two Dutch expats whose aim was to create a research center to study these local beauties. Plan a boat ride down the Mekong to see the Pak Ou caves where locals, over the many years, have filled them with Buddha statues. On the way back, see the sunset from the boat ride, too, a favored thing to do in these parts. A visit to the Traditional Arts and Ethnology Center is a must to learn about the country’s various ethnic groups, lying just outside the historic center up a steep hill.

I stood in the middle of the seasonal bamboo bridge on the Nam Khan for the sun to set, waiting for the skyline to turn a majestic pink before plunging everything into darkness after a busy day. The yellow lights along the bamboo rails of the bridge came on, signaling dusk. Luang Prabang is a delightful contradiction — a charming jewel that lures and entices travelers, peppered with various influences, but at the same time, the romanticized historic area is a cultivated hotspot. My stomach was full, my heart heavy with the knowledge my trip was coming to an end. But as I saw the sun set over the mighty river, and the houses and eateries along the water body light up, I realized, cultivated or not, Luang Prabang’s magnetic pull would bring me back again. And I could not wait.