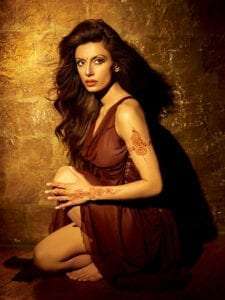 October 17, 1977, was a breezy and sunny day in the mid-80s in Mumbai, India. And on that day, a star was born. A newborn baby girl came to life. She had a great start with an adoring family, including a mom, dad, and older sister. They named this little star Tina Sugandh.

Today, Tina is a Bravo reality star, accomplished musician, activist, and entrepreneur. And for most people, she has it all, but her road wasn’t straight and had many bumps along the way. Yet she is still fiercely positive and keen on self-improvement, self-awareness, and family has always been her true north. Take a journey behind the curtains of this remarkable, talented woman.

Looking Behind the Curtain

“Life is beautiful, and I am happy,” states this 43-year-old mother of three.

Significant shifts in Tina’s life started when the Sugandh family of four moved from Mumbai to New Jersey when she was just five months old. Her mother was a marketing executive, and her dad was a senior professor. Tina says her elder sister, Seema, is “super-intelligent, altruistic, and perfect in every way.” Being the youngest family member, Sugandh had a relatively traditional daily life during the week with her parents at regular jobs and a typical school experience.

But the weekends proved to be a place for the family to come together and become a traveling musical act. Each member of her family was a musical talent. Sugandh describes her sister’s breathtaking voice, her father’s talent as multi-faceted, including comedy and playing the dholak, and her mother’s mastering of the harmonium and angelic voice with pride. Her weekends became a place for powerful family time and a heavy dose of Indian culture. The family group sang in several languages, even if the kids didn’t always understand all the words. She missed out on sports and friends’ parties, but she isn’t bothered by it.

“I got a huge dose of culture every weekend, and I am so grateful for it, “Sugandh explained. 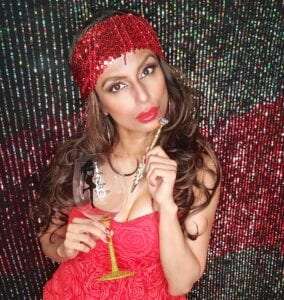 Tina identifies with all types of music, ranging from heavy metal to classical Indian. Sugandh has played with Ringo Starr – yes, that one from the Beatles. The Beatles were a significant musical influence in her home growing up. And if you are impressed, stand back and wait for more. She has worked with top artists, including Jay Jay French (Founder of Twisted Sister), Fat Joe, Timbaland, and Gwen Stefani, Dave Stewart of the Eurythmics, the E Street Band (Bruce Springsteen), and worldwide known producers of everyone from Shakira and Brittany to Metallica. She was signed with Bravo, Hollywood Records, Sony, and Warner Music. 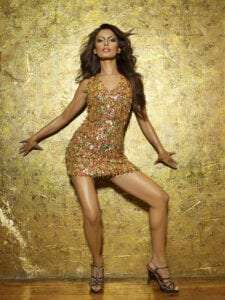 It might be easy to write Sugandh off as another self-absorbed celebrity with only glitz and glamour on her mind, but you would be dead wrong. She is uniquely herself. Armed with an honor’s degree in biology from Rutgers University and an acceptance letter into medical school, she found herself at crossroads in her early 20s. At this pivotal point in her life, she had to choose between attending medical school or accepting a record deal. When approaching her parents about the decision, her parents assured her she should follow her heart. And she easily chose to become a musical artist with Hollywood Records. What Sugandh didn’t know at the time was that the entertainment industry was brutal and often heartless. After three years and almost investing $1M into a record, her record label unceremoniously dropped her from the label as they placed their marketing budget on other musical talents signed. It was a wake-up call for her.

She says, “It is hard as an Indian (in the music industry). You need to break barriers. Sometimes it is hard to be first.”

Sugandh’s style was hard to put into one box. She was a mixture of many things. She mixed Bollywood music with pop, played the guitar and the tabla, and mixed English and Hindi lyrics. Once a leading music executive tried to convince her to be one thing strictly. But Tina felt firmly committed to doing it her way and remained authentic to her style of artistry. She was a pioneer and accepted that challenge.

In 2011, she married Tarz Ludwigsen and, a few years later, started having kids. She now has a full house with three kids (Tarz, Song, Snow), five dogs, and two businesses between her and her husband.

While she tragically lost her mother to breast cancer, she strives to be as beautiful a person as her mom was.

She says, “If I can be even half as good as the radiant, always-positive, sunshine-filled mommy that I was raised by, I know I will raise some very happy kiddos.” 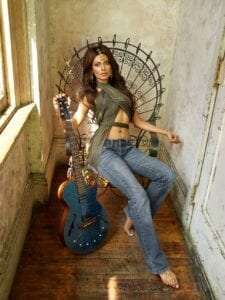 Fame attracts critics. She has been called all sorts of nasty names which live online for a lifetime. And some of them, Tina might embrace like highly opinionated, bossy, dramatic, and bold. But for each intended insult, there are many strong words that friends, family, and followers call her like driven, fun, hard-working, strong, resilient, real, exciting, inspirational, energetic, and unique.

“My Instagram has become all about helping others to tune out the negativity, which includes ignoring the social media trolls that endlessly judge and blame. This (tuning out negativity) has been something I’ve been successfully working on for years, and it’s made my life so much more peaceful to tune all that noise out as much as I possibly can,” she shares.

Being open and real with her followers is very important to her. She says she knows her openness has helped many moms with their personal journey.

“I’ve been inspired by those that share the real side of things,” she says. “But it also means I get hated on and blamed for everything from when I had a three-pound preemie to when my son was diagnosed with kidney disease. However, every reputable doctor will tell you that neither of those things was preventable at all. But people can be cruel, and if I hadn’t spent years working on that place of peace where I understand that mean, judgy people are just unhappy in their own lives, these comments would hit hard. I want that place of peace for everyone, as it’s a beautiful place to live.”

She has the courage to be disliked without being drawn into the negative energy of it. How does she do it? Laughter. When she reads negative personal attacks on her, she laughs it off these days. She even goes so far as to genuinely send love towards those haters. She adds, “Happy people don’t tend to tear others down.”

Her challenges have been many, but each time she comes out stronger. Five miscarriages, being dropped by a record label, having a three-pound newborn, living under cameras for a reality show for years, the onslaught of internet trolls and haters, having a child diagnosed with kidney disease, tensions with her traditional father, the tragic death of her mother, and her struggles with fertility are just some of her public struggles. And yet, she marches on stronger and stronger.

One example of her turning around a challenge to a good thing for others happened after her miscarriages. When women have miscarriages, Tina explained that many women blame themselves. Even families and loved ones blame the mother. But the reality is 1 in 4 pregnancies end in miscarriage, so it is a normal occurrence, but it isn’t talked about openly enough. Tina wants to change this and feels one of the most important things she has done was come out to talk about her five miscarriages openly on Andy Cohen’s show, “Watch What Happens Live.”

Where is she now, and what is next? While she is reluctant to speculate what the next ten years will look like, today, Tina is proud to be an entrepreneur in the skincare sector. “This is the last thing I ever thought I’d be doing, “shared Tina. She was on bed rest during pregnancy and wanted to spend time doing something productive and helpful instead of just watching that hospital television, and that’s how “Mom On Top Shop” was born.

“I co-created a truly natural vegan, organic cream, and scrub with a world-renowned skin-healing physician. The product ended up being the only thing that completely faded all my deep, dark pregnancy PUPPS (Pruritic urticarial papules and plaques of pregnancy, a rash during pregnancy) scars. So how could I not jar it up and share it with everyone?” she explains. “I didn’t want to feel 90 years old just because I was pregnant. I wanted to feel sexy and vibrant.”

She chose a more vibrant and energetic look for the products, and the feedback has been tremendously positive. Her best sellers, Bake it and Shake it, have many glowing reviews. She works hard at juggling her company’s responsibilities, Mom On Top Shop, and still prioritizes her family.

Tina has an adaptive mindset and focuses on an essential thing in life. Happiness. She adds, “I believe success is happiness. It’s hard to be happy. It takes work. And it takes focusing on the positive, especially last year and this year.”

Tina Sugandh is perfectly imperfect, and this works for her and promises a positive impact to those who follow her.