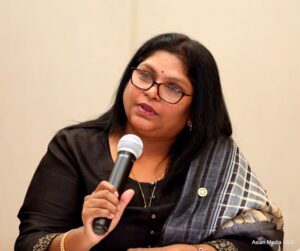 For Vasavi Chakka, running for city council in Naperville, Illinois, is an extension of what she has always been engaged in: public service.

Having been a community activist and small business owner, the IT professional and mother of two is the first Indian American to run for office in the city. The election is on April 6.

She told SEEMA that she came from a family of freedom fighters in India, her grandfather having worked closely with Mahatma Gandhi.

“I had the values of giving back to people, to society and of supporting those who have no voice, especially the marginalized and the minorities,” she says.

Chakka is now fighting on a platform of unity and growth. She feels the nation has been too divided in recent times by ideological or party affiliations and a spirit of unity is required to get  people to work together for the entire community.

As she puts it, “The community needs healing from the painful effects of the pandemic and the recent social unrest.” 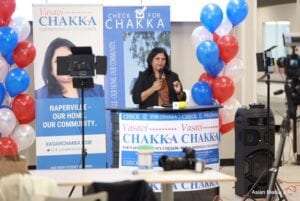 Growing up in a small village on the banks of the Godavari near Bhadrachalam, Chakka remembers standing up to give a speech against dowry at the age of 12. She was inspired by her father, a doctor who served tribal populations. After high school, Chakka went to Hyderabad to get a bachelor’s degree in science and a master’s in literature. Unusually for a south Indian, she studied Hindi literature, as her family believed in Gandhi’s proposal of using Hindi as the language to unite the country. She soon became a journalist.

In 1986, her village was flooded and everything in it, including her family home and her father’s clinic, was destroyed. With nothing but the clothes on their backs, the family sought shelter under a tree. They learned that supplies the government had arranged for distribution among the flood-hit was going to the black market instead.

“I used my press pass of the Udayam newspaper where I worked to investigate and report on the matter, thus using my voice for justice and fair play,’ Chakka tells SEEMA.

She got married, moving first to Europe, and then New York. As her children grew, she went to school herself to study computer science and landed her first job – at IBM. The family moved to Texas as she rose to management positions and became involved in leadership development and business processes.

After five years in Texas, they moved to Naperville, which she says was always rated as one of the best cities in the country for its quality of life, a diverse, vibrant community, excellent schools and libraries. 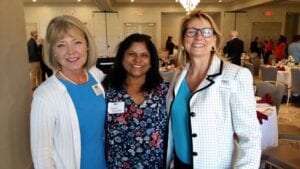 Chakka describes the moment she decided to run for office.

She accompanied her son for a meeting with the mayor, then George Pradel.

“As I heard him talk about how he had transitioned from being a police officer to mayor, I was mesmerized,” she recalls. Chakka concluded it was leaders like Pradel that helped the city rate so high. She decided she wanted to be just such a leader.

Before leaving the room, she asked the mayor how she could be part of city government. Pradel told her, “All Indians here are very fragmented. You need to bring them together.”

She started with her son’s school PTA.

She says she fought for STEM (science, technology, engineering and math) education, a new concept that people felt threatened by since they feared no resources would be left for the arts.

“We had to … explain to them how art education complements the teaching of science and that we are not trying to take away what is already there,” says Chakka, who went on to become PTA president and emphasize value-based education.

Chakka laments that less than one per cent of Indian Americans are in office.

“We need to get our voices heard,” she says. “We need to build strong bonds… Even if we don’t agree on every matter, we need to emphasize our shared values. Divisions among us led us to be slaves in our own country.”

The new generation of Indian Americans, Chakka says, does not know about India’s freedom struggle…, about its values of unity in diversity, tolerance, family and treating neighbors as family. According to her, the next generation of Indians need to know how Gandhi united all Indians, and to have pride in their country of origin so that they can intake informed decisions.

“We came to this great country which has given us so much opportunity to realize our full potential,” Chakka says. “But we also need to know where our ancestors came from. Only then can we make a valuable contribution to the country in which we are living.”

Check out the many different South Asian women in politics here.